The Prodigal Son Ends on a Cliffhanger… What Happened Next? | Magazine Features

Have you ever wondered what the parable of the prodigal son might have looked like if Jesus had continued? If he had continued the story and continued the story of a father and his offspring? I have always thought that the Gospel writer leaves Luke 15 terribly unfinished. A son comes home redeemed and saved from the moral mess he got himself into, but we never know what will happen next. As for the other son, the older brother who stayed at home, does he ever learn what it means to be accepted and chosen by the father?

I often found myself reflecting on the lives of these brothers. As I examined their behavior and God’s response, a strange desire arose for Jesus to somehow edit my Bible and provide me with a few extra verses to answer any questions. who agitated me. As I pondered the implications of radical grace writ large, I found myself wondering who God is and who he made me to be. All these questions and internal struggles come from the fact that I put myself in the shoes of the brothers. I want the story to continue because the “What next?” feels like a question that is so relevant to my own life and walking with Jesus.

When the prodigal son wakes up in his bedroom the day after the feast, after all the forgiveness and all the restoration, I can’t help but think that sounds like the new believer’s situation. If we are lucky enough to have experienced a powerful conversion, we will understand the peace that descends when we surrender our lives to Christ and receive his forgiveness. Now I could spend 10,000 words happily writing about the collision of grace that occurs at that moment, where our whole mess is overwhelmed by all the goodness of the Father, but it’s the “and forever” that interests me. , the week and even years later?

When I became a Christian, I knew I had been accepted and washed clean by God, but I also knew how prone I still was to rebelling, being selfish, and losing myself again. The parable of the prodigal son weighed on me because I wanted to know what God would do after he had welcomed the younger brother into the house. How would the father react if the prodigal son sold his ring or his cape to pay for his next dose of addiction a few days later? What if, several months later, he visits a prostitute or debt collectors show up at the door of his house? Was this redeemed child now completely healed of sin and selfishness? If not, would the father be so extravagant in his forgiveness a second or third time? I knew God was loving, forgiving, kind and a cleanser of sins, I just didn’t know how many times God would choose to save me if I kept falling. I knew I was a new creation but I didn’t know how much of the old me was left in there.

When I reached my late twenties, God blessed me by placing me in a church where people knew and loved the Father, and who were not secretly afraid that he would beat them. I found myself surrounded by other people who believed that God was better than I thought. They had a “fear of the Lord” (Proverbs 1:7), but they also understood that he was Abba, Dad. They saw that the Lord was helping them through their problems, not waiting at the end of the road with folded arms, leaving them to fend for themselves.

The parable of the prodigal son seemed to come up time and time again in the services and conferences I attended at that time. In fact, three parables about three lost things repeated themselves: a coin, a sheep and a son (Luke 15). My friend Tom Allsop preached it like this: “The coin does not know it is lost and does not know the way back. The sheep knows it is lost but does not know the way back. The son knows he is lost and knows the way back, but he must choose it. In each case, Jesus was telling us that in the family of God, lost things are sought after. The message was not complicated.

No matter how aware we are of the state of our needs, no matter how many “worst” days we have had, God the Father keeps coming for us. Jesus, who spoke only what he heard his Father say (John 12:49), and did only what he saw his Father do (John 5:19), communicates the character of the Father: he always goes looking for what he deems precious.

I felt God speaking to me during this time in a way that I had never felt before. More precious than a coin or a sheep, I realized that I had the very image of God engraved on me. I began to understand that he saw me as an adopted son, even though I was more used to seeing myself as a Christian orphan. The whole Bible seemed to shout a message to me: God, who at the dawn of creation knew that loving humanity would one day mean dying for us, did it anyway. That’s how precious we are to him.

I had never fully understood this truth before. It either passed me by or never took root properly. I had missed it, despite all the sermons I had attended and all the books I had read. I had been so busy volunteering for churches, singing songs and do all the christian stuff that I had never fully opened my heart to the fact that I was that loved and that precious to God. I knew I loved God, but I didn’t trust him enough to believe he would come back for me seventy times seven (Matthew 18:22). My theological mindset, regarding sin, was tthree strikes and you’re out – even though I knew it wasn’t biblical. Now I realize that God is telling me, “No, it’s actually seventy-seven times seven, and even more after that.

I AM WHO HE SAYS I AM

It took me many years to fully realize and accept the grace of God that I received the day I became a Christian. I became a pastor of a church, and although I thought I had it in mind and in my heart, it turns out that I had no idea how many reservations were buried inside me. I loved God, and even though I thought I knew everything about the cross, my heart was riddled with fear and insecurity.

He won’t let us take the place of a slave when he says we are his children.

Interestingly, what I’ve learned from working in churches is that regardless of age, life stage, or experience, at some point we all worry about not being enough or too broken to be loved by God and others. . It seems that no one – from the smartest kid in class to the most anointed worship leader on stage – is exempt from the fears and worries that the human heart can conjure up. And what I also realized is that what we believe about our God-given identity is the most important factor in how we respond. Either we believe we are an adopted child of God or we are a spiritual orphan. It’s one or the other.

God is who he says he is; loving, patient and kind. It is he who breathed life into the universe and united each of us in his mother’s womb (Psalm 139:13). When you believe in it, it changes everything. When we see that we are what God says we are, we can accept the restoration that comes from him; we can accept the parentage ring that he places on our finger. We see that we are no longer spiritual orphans and do not have to figure it all out on our own.

There is no need to protect ourselves or hoard what we can to survive when we understand this truth. Our value is not in how many people like our social media posts or show up at our birthday party. We don’t need to medicate ourselves with drinks, pornography, or food to feel good or valued. His words about us – those of no one else – determine our worth. And because we are so precious in his eyes, we are not allowed to diminish ourselves in front of him. He will not let us take the place of a slave when he says we are his children. We are fully restored, fully valued, recognized in heaven and on earth as God’s adopted and chosen child. This truth was the antidote to all the fears I had clung to. 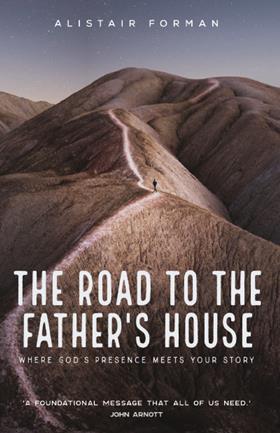 The “What Happened Next?” question became a decade-long march to my eternal home, with the Father by my side, living as an adopted spiritual son of God – the kind Romans 8 is about. sons and daughters of God think about life differently. They think of money differently, because they know God owns everything anyway. They think about their future from a position of safety in it, not a fear of the unknown. They know the stage belongs to Jesus, so they don’t have to fight for their place in the spotlight. They have peace, because they trust in the love of a good Father for them. That’s what the Christian life is really about. This is where we realize we’re not just saved from something, but also for Something.